This quarterly report should be read in conjunction with the Main Estimates, the previous quarterly reports for the current fiscal year, as well as Canada’s Economic Action Plan 2012 (Budget 2012). It has been prepared by management as required by section 65.1 of the Financial Administration Act and in the form and manner prescribed by Treasury Board. This quarterly report has not been subject to an external audit or review.

This quarterly report has been prepared by management using an expenditure basis of accounting. The accompanying Statement of Authorities includes CAS’ spending authorities granted by Parliament and those used by the organization consistent with the Main Estimates for the 2014-15 fiscal year. This quarterly report has been prepared using a special purpose financial reporting framework designed to meet financial information needs with respect to the use of spending authorities.

The authority of Parliament is required before moneys can be spent by the Government. Approvals are given in the form of annually approved limits through appropriation acts, or through legislation in the form of statutory spending authority for specific purposes.

CAS uses the full accrual method of accounting to prepare and present its annual departmental financial statements that are part of the departmental performance reporting process. However, the spending authorities voted by Parliament remain on an expenditure basis.

Significant Changes to Authorities available for use for the fiscal year

As at December 31, 2014, authorities available for use for the fiscal year decreased by $1,451 thousand (-2%) compared to the same quarter in 2013-14, from $72,217 thousand to $70,766 thousand. As a result of the Government expenditure management cycle and certain conditions imposed by Central Agencies, there are often significant fluctuations by quarter between authorities received and the timing of expenditures realized.

This decrease in authorities is largely due to the timing of the transfer of funding for eligible paylist requirements. Paylist requirements include severance pay and termination benefits, vacation credits payable upon termination of employment, and parental benefits. In 2013-14, a transfer of $1,272 thousand for paylist requirements was received in the third quarter of the fiscal year. In 2014-15, as per central agency direction, CAS will be seeking reimbursement near the end of the fiscal year of amounts for which requirements are identified. Any additional paylist expenditures that are not reimbursed will be eligible for inclusion in the operating budget carry-forward.

Also, there was a $508 thousand reduction in funding related to the implementation of savings measures announced in Budget 2012. The details of these savings measures are explained in the Budget 2012 Implementation section below. In addition, a $365 thousand decrease in authorities is attributable to adjustments to CAS’ contributions to employee benefit plans, as per central agency direction.

These decreases in authorities were partly offset by an increase in funding of $348 thousand received for negotiated salary increases for signed collective agreements. Also, the 2014-15 operating budget carry-forward funding was $231 thousand more than in 2013-14. Various other minor changes resulted in a net $115 thousand increase in authorities.

Figure 1 presents current and prior fiscal year expenditures compared to annual authorities, as of the end of the third quarter. These results are discussed in the sections that follow. 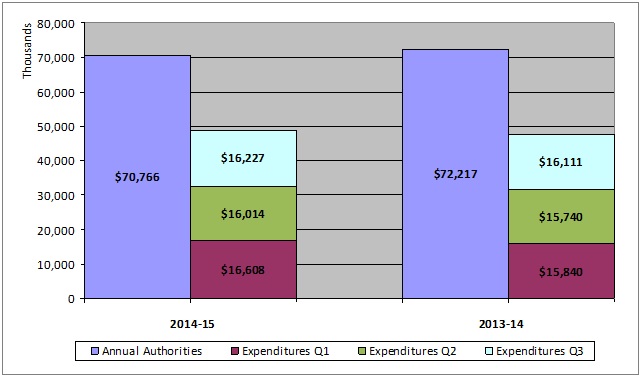 Additionally, there was a $141 thousand (106%) increase in rental expenditures, from $133 thousand to $274 thousand, as well as a $99 thousand (660%) increase in other subsidies and payments. The increase in rental expenditures is mainly attributable to timing variations related to the processing of expenditures between quarters. The increase in other subsidies and payments is mainly attributable to the reallocation of costs under the government-wide shared cost program for Human Resources and Financial Management Systems, as well as refunds of amounts credited to revenues in prior years related to Tax Court of Canada filing fees.

The above increases were offset by a $261 thousand (-2%) decrease in personnel expenditures, from $12,533 to $12,272, mainly attributable to a decrease in the settlement of previously earned and accrued severance pay and a decrease in CAS’ contributions to employee benefit plans, as per central agency direction.

Minor variations in the timing of the delivery of goods and services account for the remaining $46 thousand decrease in third-quarter expenditures in 2014-15 compared to the same quarter in the previous fiscal year.

The increase is partly due to transition payments totalling $1,520 thousand, mostly expended in the first quarter of the fiscal year, for implementing salary payment in arrears by the Government of Canada. The transition payments have been classified under other subsidies and payments, as per central agency direction. As compensation, CAS will receive additional appropriations from central sources later this fiscal year or will be credited this amount through the normal carry-forward process at fiscal year end.

Year to date personnel expenditures decreased by $1,397 thousand (-4%) compared to the same period of the previous fiscal year, from $37,904 thousand to $36,507 thousand. This decrease is primarily related to the settlement of previously earned and accrued severance pay, as well as a decrease in CAS’ contributions to employee benefit plans, as per central agency direction.

Additionally, there was a $378 thousand (185%) increase in the acquisition of machinery and equipment, from $204 thousand to $582 thousand, as well as a $324 thousand (6%) increase in professional and special services, from $5,142 thousand to $5,466 thousand. Both of these increases were attributable to information technology (IT) and security activities and initiatives.

Minor variations in the timing of the delivery of goods and services resulted in a further $333 thousand increase in year to date expenditures.

The financial situation of CAS remains precarious and it will continue to pose both risks and challenges in the years to come. For some years, CAS has been lacking the permanent funding necessary to enable the organization to fully meet its commitments and address major program integrity issues. Budget 2011 partially addressed this need, providing CAS with approximately $3 million per year for some program integrity measures. However, Budget 2014 announced that the operating budget of departments would be frozen at their 2013-14 level for the years 2014-15 and 2015-16. This represents a significant risk and uncertainty for CAS because additional funding will not be received for future salary increases resulting from signed collective bargaining agreements.

Judicial functions of the courts are a responsibility of the judiciary and impose requirements that are beyond CAS’ control. A majority of the non-personnel expenses incurred by CAS are contracted costs for services supporting the judicial process and court hearings. They include translation, court reporters, transcripts, and security services, and they are mostly driven by the number, type and duration of hearings conducted in any given year. These are essentially non-discretionary and limit the organization's financial flexibility.

The aforementioned pressures and uncertainties continue to impact the ability of CAS to deliver on its programs and to support the judiciary. The lack of funding impacts the upgrade of aging IT systems, necessary enhancement of security measures, maintenance and upgrade of court facilities to address health and safety concerns and other capital investments.

To address these risks, CAS will continue to monitor closely its budget spending through frequent reviews of expenditures to rapidly identify and address financial pressures. CAS will also continue to work collaboratively with central agencies to identify a sustainable funding model.

With the coming into force of Bill C-43 Economic Action Plan 2014 Act, No. 2, effective December 14, 2014, the jurisdiction for payment of prothonotaries’ salaries, pensions, benefits and other administrative arrangements has been transferred to the Office of the Commissioner for Federal Judicial Affairs (FJA) Canada. Amounts are still showing in CAS figures pending the transfer of associated funding to FJA.

This section provides an overview of the savings measures announced in Budget 2012 that are being implemented in order to refocus government and programs, make it easier for Canadians and business to deal with their government and, modernize and reduce the back office.

To contribute to the Government’s effort to reduce the deficit, CAS has committed to use its resources more efficiently, by streamlining its services and redistributing work. In 2012-13 and 2013-14, CAS achieved savings of approximately $0.5 million. Savings increased to an ongoing amount of $1.0 million in 2014-15.

There are no financial risks or uncertainties related to Budget 2012 savings.

There were no significant changes in CAS operations, personnel and programs as a result of the implementation of the measures announced in Budget 2012.


1- Includes only Authorities available for use and granted by Parliament at quarter-end.